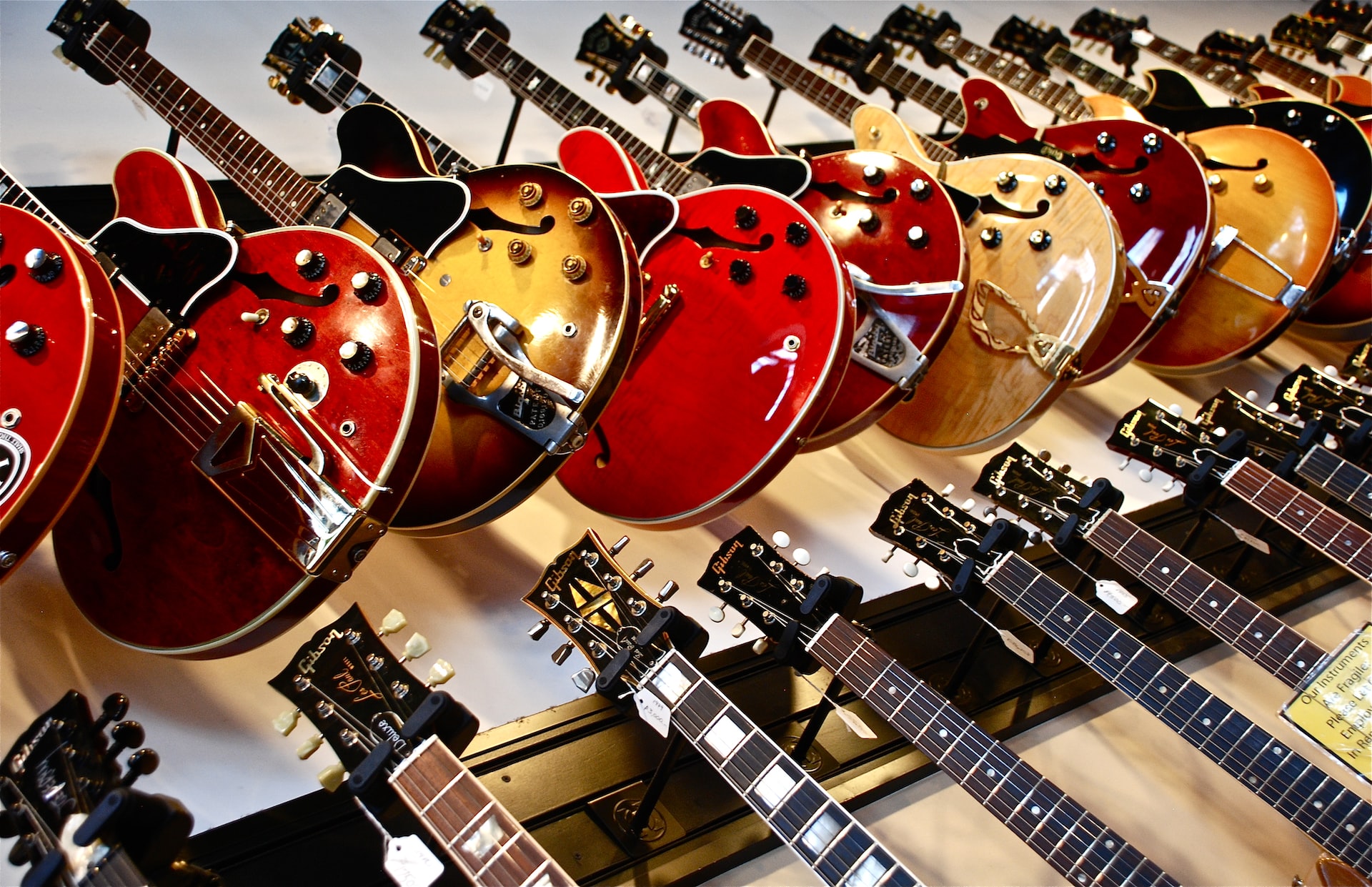 Many people who start cannot decide whether to go with Ibanez or Gibson. While both are excellent brands, they just want a worthy bang for their buck whilst still not having to overspend. So most times, they ask; “what is the difference”?

While both are different in their way and style, the Ibanez’s is known as a much lighter, less bulky, and even cheaper option than Gibson’s. Ibanez also has thinner necks, whilst Gibson’s, have thicker necks. However, both are excellent brands with quality construction.

I am sure after going through this article, you would stop being confused about which to go for. Let me take you through the essential things you should know about the Gibson’s and Ibanez brand.

Having to pick which one has better quality at a superficial level is not easy, especially because they are both good and excellent brands that have stood the test of time over years.

However, we should compare these mighty pieces based on the wood used, paint and their quality control to see which is actually of a more superior quality. 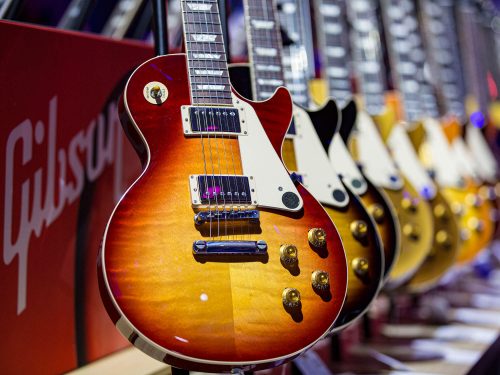 Gibson guitar are manufactured with best quality of wood

Gibson guitars are usually made of higher quality materials than Ibanez Guitars. Due to its widespread use in less expensive guitars, Ibanez is generally regarded as low-end – when compared to Gibson.

Gibson guitars are manufactured with premium components and long-lasting construction methods.  Ebony, mahogany, maple, or rosewood make up the great majority of Gibson guitars. Gibson only employs the finest cuts of this wood, which explains its quality.

Contrarily, Ibanez instruments are primarily made of soft, common basswood. This is because you rarely see high-end manufacturers use it. 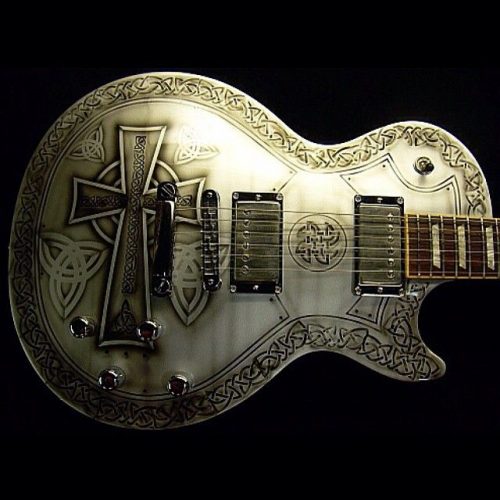 You can use paint on Gibson guitar as per you demand

Gibson uses a higher quality finish with nitro lacquer on their guitars, when compared Ibanez who uses polyester.

This nitro finish on Gibson has been hand-buffed to a highly reflective, high-gloss surface. The tone of the instrument is not diminished by nitro-cellulose, unlike other less expensive finishes, and it ages beautifully.

For faster drying and durability, all Ibanez models made in Korea, China, and Indonesia use a clear that is 50% polyester and 50% urethane which although still a good finish, cannot be compared to the Gibson finish. 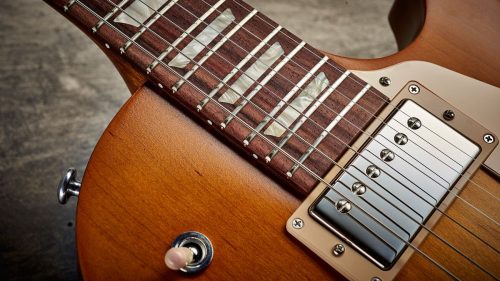 A Gibson guitar must first undergo testing in a plectrum machine to pass all of the quality control tests in place before it is made available for purchase – which makes it higher quality guitars when compared to Ibanez.

This specialized tool was created to evaluate the quality of every guitar that leaves the Gibson assembly line. Even the smallest flaws can be detected by the system because of its millimeter-level accuracy.

Sincerity dictates that Ibanez appears to be no match for the Gibson brand in terms of quality control. According to customer reviews, the Q.C system has received numerous complaints. No wonder Ibanez’s third place after Gibson and Fender.

Even though many Ibanez guitarists can attest to the excellent tone it produces, Gibson guitars are best recognized for their warm, rich tones that offer a complete range of sounds for every style of music.

Gibson chose the resonant, gutsy tone wood mahogany for their guitars because of its richness and character. The mahogany bodies and necks of Les Paul guitars are a major contributing factor to their legendary sound.

It’s also important to keep in mind that many Gibson guitars include mahogany bodies and necks, providing them superior tonal abilities than Ibanez.

However, Ibanez’s use of humbuckers tends to give its guitarist a “beefier” sound, which is why metal and hard rock musicians frequently choose them.

Gibson’s are considered to be more expensive than Ibanez. They come in a wide range of prices, Tribute guitars start at around $800.

The reason Gibson Les Paul guitars have such a high price tag is that they are handcrafted in the United States of America from only the very highest quality wood that is aged.

Other guitar manufacturers do not produce their guitars with materials of such high caliber, which may assist to explain why using them is more expensive.

Ibanez starter guitars, on the other hand, range in price from $120- $450. Ibanez is quite inexpensive. Although Ibanez has a reputation for being reasonably priced, which makes it a great choice for a beginner’s guitar, their higher-end versions may be incredibly pricey and can cost up to $2000!

Ibanez guitars, also known as shredding guitars, have the reputation of being used exclusively for the heavy metal genre, whereas Gibson is mainly known for rock or blues.

Gibson Les Paul electric guitars have been employed in a variety of musical genres because of their adaptability, including rock (particularly classic rock), country, pop, soul, rhythm and blues, jazz, reggae, punk, and heavy metal.

Despite being geared primarily toward the metal scene and featuring heavy distortion, Ibanez guitars are not exclusively metal. The Art core series is a selection that caters to diverse musical styles like jazz, country, funk, and blues.

Ibanez guitars have a variety of attributes that make them perfect for everything from heavy metal to classic rock, including their classic and distinctive forms, high-quality hardware, hot pickups, and quick necks.

Most Popular Guitar: Ibanez Vs Gibson

The most popular guitar for the Ibanez brand is the Ibanez RG550 Genesis Collection Electric Guitar whereas for Gibson, it is Gibson Les Paul Studio EB.

Pickups V7 Humbucker + S1 Single Coil + V8 Humbucker. The key component of this electric guitar is its Wizard Neck, which I found to be quick and enjoyable to play. It has a 5-piece neck constructed of walnut and maple.

In higher gain settings, the RG550 offers biting mid and the perfect amount of compression. We believe the Ibanez RG550 is adaptable enough to play in other guitar-oriented genres, with the possible exception of jazz. Sure, that makes this guitar almost ideal for metal, hard rock, prog metal, and other heavy genres where fast playing is required.

Because of the speed and the overwhelming sense of nostalgia, metal players will adore it. Most metal guitars can only dream of having a legacy like the RG550’s, which has a ton of personality. It is essentially the greatest that the brand has to offer and the best Ibanez guitar under $1,000.

Undoubtedly one of the most recognizable electric guitars ever created is the vintage Gibson Les Paul. The Les Paul is equipped with a set of humbucker pickups, which are stronger than a set of single coil pickups, making this guitar more potent than a conventional Blues guitar.

Gibson wanted the Studio to feel the same as the Classic, which is known for its sustain, so they made sure to keep the necks feeling a little bit chunkier.

The Gibson Les Paul guitar will give you a superb sound whether you intend to play your blues guitar cleanly or with a distorted tone.

By turning one of the knobs on the 2017 Standard, you can make your guitar sound like it has single coils by using coil-splitting technology. Gibson truly outdid themselves with this fret, since there are no jagged edges and barely any fret noise.

The Gibson Les Paul Studio is a fantastic alternative that costs just under $1,000.

Q: Are Ibanez Guitars Any Good?

Their craftsmanship is exceptional, and you receive a perfect professional instrument worth your cash.

Ibanez guitars are well-built and unquestionably highly playable; they are made in Indonesia and are renowned for having a high level of inspection.

They are great for beginning players as they provide a great selection of beginner-friendly entry-level models that are affordable yet high quality aimed at the beginner market.

Q: Is Ibanez Owned by Gibson?

Ibanez is not owned by Gibson. Ibanez is a Japanese guitar brand founded in 1908 and owned by Hoshino Gakki.

Hoshino Gakki, based in Nagoya, Aichi, Japan, was the first manufacturer of mass-produced seven-string and eight-string guitars.

They were also one of the first Japanese musical instrument companies to establish a sizable presence in import guitar sales in the United States and Europe.

The Ibanez brand is not a part of the Gibson Brands portfolio. Gibson’s brand portfolio includes Epiphone, Kramer, Steinberger, MESA/Boogie, the Gibson Pro Audio division, and KRK Systems, among many other well-loved and well-known music brands.

Q: Which Guitarists Use Ibanez?

Although famous artists have a choice when it comes to guitars many have selected the unique brand of Ibanez. Below is a list of famous guitarists that use Ibanez.

Since the late 1970s, Steve Vai has worked in the music industry. He has had fifteen nominations and has won the Grammy three times.

Throughout his long career, Vai has collaborated on albums and tours with renowned musicians like David Lee Roth, Whitesnake, Ozzy Ozbourne, and Mary J. Blige. Additionally, he has performed as the star of numerous worldwide tours.

The Universe and JEM electric guitars are the two instruments that Steve created for Ibanez guitars.

It is only due to Vai that these guitars have become well-known. Additionally, Mr Vai has several Ibanez acoustic guitars.

Steve Miller is a well-known American guitarist, singer, and songwriter. He was admitted to the Rock & Roll Hall of Fame in 2016.

When he was pictured with an Artist Ibanez guitar in Guitar Player magazine, he significantly increased his interest in Ibanez guitars. The image served as the company’s logo and helped Ibanez sell more guitars of that particular brand.

Kevin is a principal guitarist for the Offspring band. He was raised in Los Angeles, California, where he was born.

His incessant noodling on the guitar a style of playing that is well-known in the guitar industry is how he came to be known as Noodles. The majority of the time, Noodles is known to play Ibanez guitars.

He currently has four Talman-made Ibanez guitars. The NDM1 was his first, and the NDM2, which features the offspring’s logo, was his second.

The NDM3 has 90 picks, his NDM4 has 90 picks plus it has a sunburst finish on it. His career has definitely given the Ibanez brand a boost in the guitar industry

Paul is well-recognized for his work with the well-known band ‘Kiss’. He spent many years as the band’s rhythm guitarist and co-vocalist, and he currently performs with them on tour.

He is in charge of a lot of their top hits. In their ranking of the Top 100 Male Vocalists of all time, Hit Parader placed him at number 18.

Together with Gene Simmons, Peter Criss, and Ace Frehley, he later went on to find the rock group, Kiss.

The group has enjoyed great success. Paul Stanley uses Ibanez guitars exclusively, and he prefers the Ibanez PS models, which are extremely close to the Ibanez Iceman and both are great options. 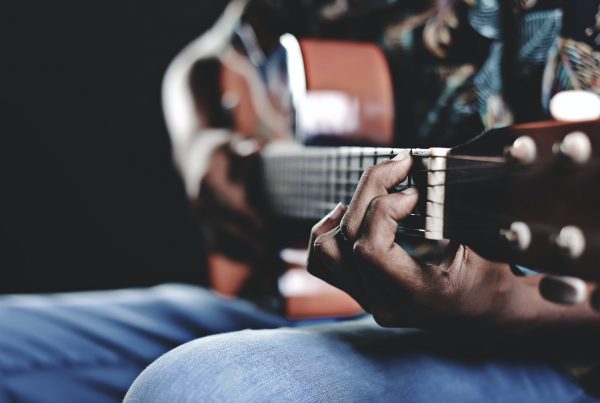 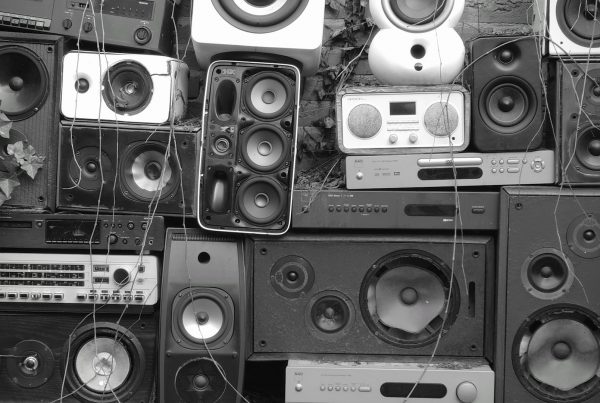 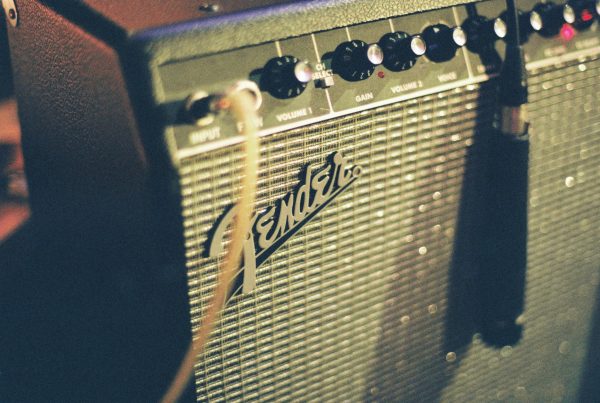 Can You Stand Or Sit On Amp? What NOT To Do With Guitar Amp